While pity lived, nothing could ever stir his lust

‘Then who does cope with you?’

‘No! You mustn’t. No one ever should. And I shan’t let you. Now I know all this, I shall insist on being allowed to cope with you.’

No, he thought, not yet. Not to-day. Cowardice? He was sure it was not. It was a different kind of reluctance, the reluctance that came from knowing, deeply and inwardly, that the moment was not yet ripe, and would ripen. There would be a time, and soon, but it was not to-day.

Instead he reached up, putting his arms round her, and drew her down. She responded willingly, her lips, half parted, finding his. He kissed her, wondering what was different. Then he knew. He had kindled pity in her and, in so short a space, pity was alive in all her actions, even in this, in passion. And it would never die; it would live and spread until it was killed. 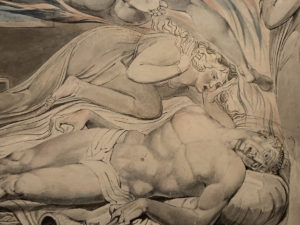 He drew his body away from hers, and stood up. Not to-day he would kill it, but soon. She lay back on the bed, and pity was in the grey-green eyes and round the fine mouth. It was over between them. While pity lived, nothing could ever stir his lust towards that magnificent body, and when pity had been killed it would be too late. Other things would have died with it.