What can I get for you this morning?

Food was the most immediate need. The little general shop at the end of the lane. He came to a place where the ground had buckled into a ridge five or six feet high, a sycamore fantastically projecting out of it, and climbed over. The heap of bricks and wreckage beyond would be the cottages; the shop had been on the far corner.

It was hard work and, to start with, unrewarding; then he began to get lucky. He hit on the small hardware section and discovered a couple of undamaged saucepans, and next matches. Several gross packages were mashed and scattered, but he found almost a dozen individual boxes in fair shape. Then a kitchen knife, and an aluminium soup ladle. Immediately after that, the best find of all. The cardboard container was battered and torn, but the object inside was undamaged. A tin opener. One of those elaborate ones, meant to be screwed on the wall of a neat modern labour-saving kitchen; he was surprised that Mrs Triquemin had stocked anything so advanced. But the important thing was that it would open tins. All he needed now were the tins to open. 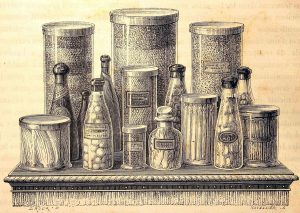 He found Mrs Triquemin first. Her face had the look of faint surprise which had been habitual, as though she were about to open her mouth and say: ‘Why, it’s Mr Cotter – what can I get for you this morning?’ The lower half of her body was buried under heavy granite blocks. Matthew covered her up, and went on with the search.

Suddenly he hit treasure trove, a mine of tins of all shapes and sizes underneath the shelves from which they had cascaded. Nearly all were battered and quite a few had burst open, spreading a paste of meat and fruit syrup, processed peas and concentrated soup and other unidentifiable components all round.