I would not deny what had happened to me under the Arthur tree, nor belittle it. His kiss had aroused a feeling in me I had never known or imagined. I could vouch for my own effect on him by the strength of his on me. I had read of kisses and love-making in romances, but nothing I had read had prepared me for the reality. I had tried not to think of it, but it troubled me still.

Not because of the stirring of my senses. That had been strange enough, but not frightening. The fearful thing had happened not in my body, but to my inner self. It had been the longing – deep and blinding and growing, growing until it threatened to sweep away all resistance – to surrender everything, volition, will, identity even, to the man who held me in his arms.

I stared at the face in the glass – beautiful, men told me. 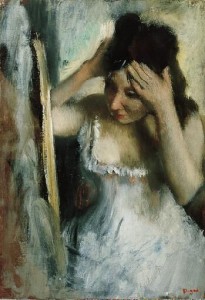 Had that been me, and could it be again? I knew the first was true, and feared the second. If this was the love they wrote of, I rejected it. My will was my own: I valued it more than anything I had, or could hope to have. Far more than wealth or position, or even beauty.

And because I feared love, I would guard against it. What had happened that evening had happened unawares: warned now, I was forearmed. I thought of my commitment to Michael, and was grateful for it in quite a new way. Had I not been engaged it might have been more difficult. As it was his love and my covenant protected me. I would not betray him or myself.

I finished brushing and turned down the lamp. The face that looked at me was darker, shadowed and mysterious, lit only by the second distant lamp beside my bed. But though a face might change, I would not. The time for indulgence was over: I would not think of him or that moment again. There were so many other things in the world to think of: safer things.

I went to bed, and did not let myself think of Andrew. But it was a long time before I slept.