The rain had gone, the dusk was calm, the sky glowing in the west, and I felt the need for fresh air after being cooped up all day in the house. And the need for a solitariness no room could provide.

I was unhappy about Emily. She had spoken of my stubbornness, and I cursed that alliance of it with pride which had kept me from being frank with her. I was to have a husband and would care for him, but I did not want to lose a friend. My need was greater now rather than less.

But it was silly, a quirk of melancholy, to think I should lose her because of that. Misunderstandings were a natural hazard of friendship, and she was much too sensible to let it grow into an estrangement. Even I, I told myself with rare charity, was too sensible, and that being so, my own stiff­-necked nature having been responsible for our being at cross-purposes, I must take the initiative in putting things right. I resolved that before I went to bed I would write her a note. Not about anything in particular, but simply friendly. She would understand.

That having been resolved, I felt better. I was abreast of the Arthur tree, and on an impulse decided to look more closely at it: 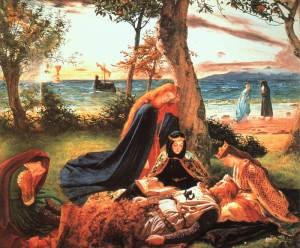 in the half-light it looked even more real, a green rider on a green horse. I turned from the gravel drive and walked across the lawn which, water-logged from the rain, squelched gently under my boots. I stood under the tree and stared up at it, remembering that other time and Sir Donald telling me of the Roman King.

He had fought for old good things against fearful odds. And against those odds he had held the bloody onslaught of the Saxons, driven them back, regained the land of his fore­fathers. But what was left him in the end, with Guinevere lost, Lancelot estranged, Mordred proved treacherous? A sense of duty done? The story said he had not died, but been taken to Avalon to heal his grievous wound. I could not believe that part. There was no Avalon and had never been. Only death; and the knowledge, because he was a wise man and courageous, that it had all been for nothing. The Round Table was dissolved, the land once more defenceless to the savage greed of the Saxon.