Cut yourself a piece

She cut meat for herself from the carcase while Billy watched, a glass of wine tilting in his hand. He motioned to Susan and Toni, and they followed suit. Then he made the same peremptory gesture to Katey.

He looked at her in silence for a moment. At last he said:

‘Come here.’ She hesitated, and went towards him. ‘What do you mean, you don’t want any? What’s wrong with you? Sick or something?’

‘The shape,’ she said. ‘Those little twisted front legs …’

He said with exaggerated patience: ‘No one’s saying you’ve got to eat the front legs. Take a cut off his arse. Nothing wrong with his hams, is there? Is there?’ 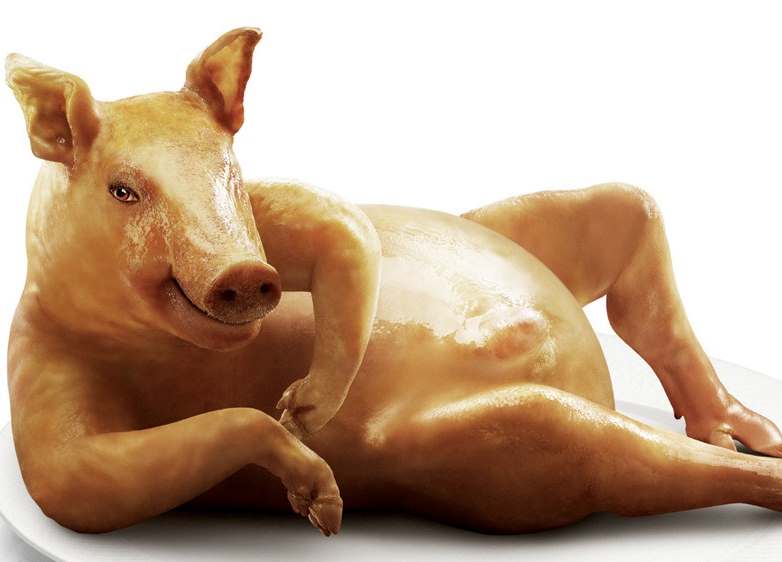 ‘All the same what? Cut yourself a piece. You’re keeping everybody waiting.’

‘No.’ She stepped back. ‘It’s deformed, beastly. I don’t want any. I’ll just have breadfruit, and fruit.’

His eyes on Katey, Billy said to Toni: ‘Cut some meat off.’ She picked up one of the clam shells they now used for plates, and cut a few slices on to it. ‘Take it to her.’ He leaned forward. ‘You’re going to eat it, Katey. I’m responsible for you, you know. Got to keep your strength up.’

He was drunk, and she wanted to avoid trouble. She took a small piece of crisped meat and put it in her mouth, hoping by this means to take attention away from herself: she could get rid of the rest later. But in the act of swallowing she remembered what the beast had looked like. In a spasm of nausea she turned her head and was sick.

Billy waited until she had finished retching before he spoke. He said, in a quiet somewhat amused voice:

‘That bit went down the wrong way, eh?’

She said faintly: ‘I really couldn’t manage it.’