The Commander took over again. ‘That’s hard. You a creeping Jesus, and you never get to see the big man?’ His fingers moved to caress the blond boy, gently stroking along the line of his jaw. ‘Sounds like a pretty poor sort of organization to me.’

‘Maybe we should help him.’

The tone of voice was amiable, but Martin found himself shivering uncontrollably. The Commander said: 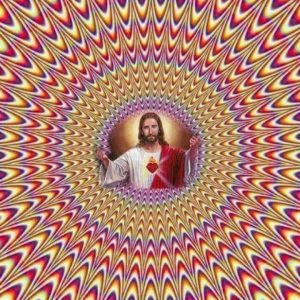 ‘He’s scared,’ the Commander said. ‘We oughtn’t to scare a Robey, or the God wonk won’t like it.’

‘When I make a trip, it’s like mountains and switchbacks, doing a ton and a half on a road that runs across the sky, picking the flowers in a garden full of cocks. But I’m not religious like you are. Maybe you’ll see angels, the Pearly Gates, the geezer on the golden throne.’ He pressed his head in against his companion’s neck. ‘What do you think, Commander?’

‘I think the God wonk would like that,’ the Commander said, ‘I think it’s a fine idea.’

‘Hold him tight,’ the blond boy said. ‘Sometimes they don’t know what’s good for them.’