A strange and wonderful place

This was a strange and wonderful place. A canyon whose walls were the squared outlines of terraced houses. He saw things in the light from the street-lamp which he was passing, and stopped so that the seeing should be fuller, stronger. The texture of brick: honeycombed, rubbed by a hundred thousand passers-by over a million different seconds. A place where one day, in a winter’s frost, perhaps, or at a moment when a heat-wave was causing tar to blister on the surface of the road, concrete had cracked, leaving this jagged scar, whose depths were mystery. Near the base of the lamp itself, a globule of phlegm, hawked out from some old man’s bronchitic chest. He peered to look at it, not with repugnance but with amazement. Its reality and its uniqueness delighted him. Here was the ground of being, the miracle of existence in epitome. 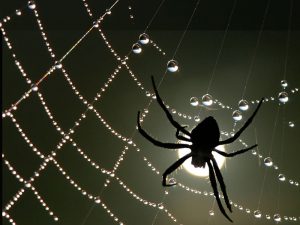 The light itself seemed, as he turned upwards to the lamp, to beat against his face, a radiant intangible rain, but dry, not wet, cold and yet warming, a flowing artifice, made by man, by God-in-man, by man-in-God. Such power everywhere … Power and love. A privet hedge, topping the begrimed brick wall. Each leaf itself. One there, with its edge withered by a patch of blight, the brown and the dark green, never to be repeated. A spider web, barely visible at first and then, under the dominion of his eyes, spun steel and silver, holding at one point a raindrop that was a rounded crystal of worship, a bead of meaning. Power and love. The spider, crouched dark and dreadful, and full of beauty and strength, grasped in each instant by God.

There was nothing to fear; there never had been. The power was God’s, and the power was his, also.