The bringer of death

The light of the next street-lamp. The pavement was a world, far below his probing eyes but each detail sharp. A burnt match, a flaw 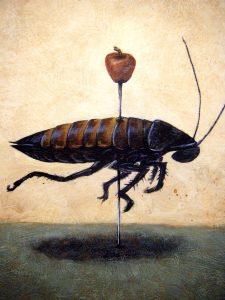 in the flagstone, a small insect travelling slowly across the vastness of steppe between kerb and wall, a scrap of paper shivering in the light breeze. A world, open and defenceless. He watched as the insect traversed its immense and tiny plain, passing near the fluttering paper, skirting the flaw, actually crossing the matchstick. It had done half its journey, three-quarters, come within a foot’s breadth of its mighty and meaningless and squalidly ordinary goal. And there, bringing his foot down slowly and precisely, he crushed it.

He went on down the road – the bringer of death, wielder of justice. He thought he heard the noise of motor-bike engines, and laughed again. He wanted them to come, racing towards him through the night, so that he could put up his hand and stop them, send them spinning away to crash, in tangled flesh and metal, against the wall. Not revengefully, but in demonstration. All things balanced: these, and the dead insect.

Then he looked up and, without warning, fell a million million miles.