‘How do you plead?’ the yob asked Rod and Micky. They did not reply. He looked up at the Commander. ‘What does that mean, m’Lud?’

‘Call it Not Guilty. Get on with it, Nipper. What about defence counsel? Got to give him every advantage. Defence counsel all prep 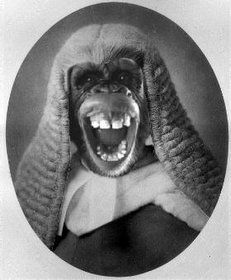 ared? Bring him in then.’

He came in through the door at the back, with a yob on either side. They were holding him, but not tightly. It was Peter, dressed as a parody of a barrister. A black gown much too big for him – Martin’s old graduation gown, found in some cupboard? – and a wig contrived from cotton wool. They had put a pair of spectacles on his nose, too: the heavy-sided black ones which Rod used for reading and writing. The yobs were laughing as he came towards the centre of the room, stumbling over his feet.

That would be the spectacles, she thought; of course he could not see properly through them. But if this were all – just a stupid joke – there was nothing to worry about. They could not mean to do anything much to Rod and Micky. Peter was probably taking it all as a joke; he quite enjoyed dressing up.

‘Counsel for the Defence. Don’t say we’re not giving you a fair trial.’