People do funny things these days

They saw people about an hour after they had started on their way. They were some distance from the road. Their clothes were the usual assortment of bits and pieces, and their general appearance unkempt. Matthew could only tell from the lack of beards that they were women, one in her twenties, one a good deal older. They had not seen him, and he called to them:

Their reaction was immediate. They stared at him for a moment, and began to run away. The older one stumbled, and the 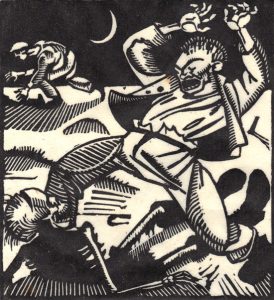 other paused to help her. Matthew called after them again, trying to be reassuring, but they ran on. There was a thicket a couple of hundred yards away. They went in, not looking back, and disappeared among the bushes.

Billy said: ‘Were they frightened?’

The women’s fear communicated to him as an apprehension. Could this be the pattern of things – small isolated groups of two or three people, grubbing for food in the fields and the ruins, running from the sight of their fellow men? Surely there must be some who could impose order, as Miller had done?

He said: ‘I don’t know, Billy.’ He began to walk on. ‘People do funny things these days.’