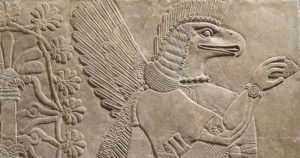 ‘Interesting! It was that. I was Corporal then. It was just before I got busted the second time, by that bastard up from the depot. For having a bit of a drink, which there wasn’t an NCO in the battalion hadn’t had as much or more. I can see it as I stand here: a long trench in the ground and things being lifted up out of it – bits of broken pottery and little statues and such. And stone angels. And no eyes had seen them before mine for thousands and thousands of years. I asked the padre next day how he accounted for it, and he talked a lot of gabble which made no sense. But I’d seen them, as clear as I see you now.’

He broke off, and looked critically at the floor.

‘You’re not much of a hand at cleaning, are you, son? I’d make a better job of it myself, if it wasn’t for this arthritis in my hip.’