Billy returned, carrying the pot. They could hear a rustling, the clank of shell, and he said:

He opened the top of the wicker pot and spilled the contents on the sand. There were two small lobsters and a larger one. It was the larger one which drew their attention. 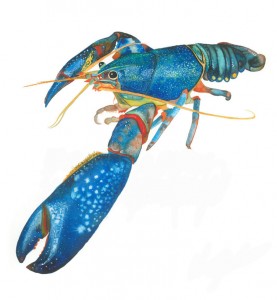 The colour was wrong for a start; pale blue against the dark blue of the other two. And then there were the claws. One was small and feeble-looking, the other enormously swollen and ending not in one set of pincers but two. The effect was grotesque and unpleasant. It squirmed and hitched itself in the direction of the water; Billy kicked it back with the side of his shoe.

‘That’s an ugly bugger,’ he observed.

Katey cried out: ‘Throw it back in the sea! It’s hideous. Get rid of it.’

‘Plenty of meat on him,’ Billy said. ‘He’ll cook all right.’