Autumn brought little or no relief from the general buffeting of wetness and wind that had characterized the summer. Day after day was sunk in the salt ocean of nature’s 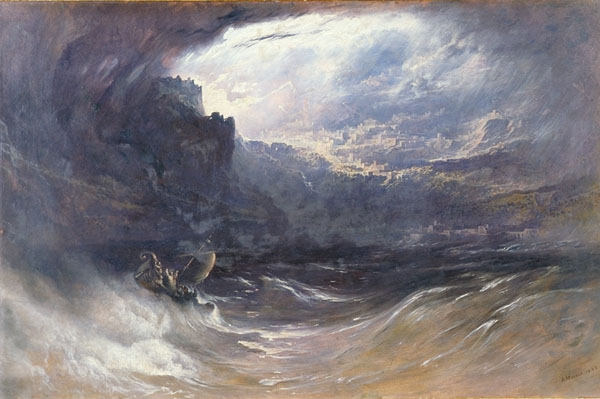 unquenchable misery; the edges were damp and the heart of things was soaked in tears. The waters falling endlessly from the heavens made me think of the waters that rose to cover a sinful earth. That myth’s symbolism was not inapposite now, when every hour saw another inch of our forefathers’ laborious artefacts whittled away by the surging tide of human guilt and misery and despair. Occasionally the sun would catch the jewelled spire of some great relic so that its beauty echoed and re-echoed against the lowering horizon in brief and concentrated glory, before the lapping waves devoured it. Occasionally the flood appeared to recede, but the moment’s illusion was lost almost at once as the hollow curved up to a new crest of destruction.

But in this deluge most of us had, if not arks, at least rafts. We bobbed high enough, and even gained some exhilaration from the view of toppling spires and domes. We were dry; we were – for the moment – safe. It occurred to me once that this, too, might have its relevance in fable. Had others before found boards and lashed them together? Were there even some who survived, perhaps, for thirty-nine days before the grey waste of water at last overpowered them? It was an idle thought. We knew now that, whether the Flood were real or not, the Ark, undeniably, was an illusion. And thirty-nine days gone by would leave no hope on the fortieth morning. These waters would not drain away.