I had dreams. I could not recall later what they had been, but I knew they were nightmarish. There was fear in them, a fear which was the more powerful for being undefined. Then at last the fear took shape, and not only shape but substance. Something was pressing down over my face, soft and warm and heavy on my mouth, stopping my breath.

I tried to free myself, and could not. I was hot and sweating, helpless against my attacker. If I could cry out … but there was no hope of that. I attempted to brace myself, to force myself up against whatever was oppressing me. Relentlessly the weight bore me down. 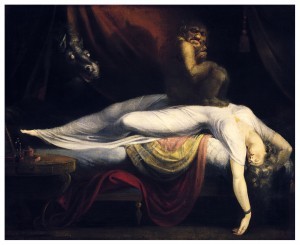 The muffling heaviness seemed to have been overlying me for solong that I did not know how I could be living still. I wondered frantically if perhaps I no longer were – if this drawn-out agony was death, and punishment.

At that moment the burden shifted slightly. It was not by much and almost at once it seemed to press back, but it roused me to a despairing effort. I ceased trying to struggle up against it and put all my strength into a writhing sideways motion. Linen, swathing and tangled, still stopped my mouth; then, blessedly, I was free, drawing in air and letting it go in an exhausted cry.

Blood was pounding in my head. I breathed in again, deeply, the air more precious than food and drink could ever be.