A walk down by the beach

They were called to their supper, the food set out on leaves which were roughly circular, a foot or more across, and glossily smooth. The taste of the pork, roasted over an open fire, was exquisite; with it the cook had served green beans from the patch in the valley and a root which he had told them was taro. Its colour when cooked was an unappetizing violet, but with night falling on the clearing this was not much in evidence. The taste was excellent. They had water and palm wine to accompany the food, and the glow from the fire on which the pig had been cooked to cheer them. The cloud on the mountain was invisible now, except where it blotted out stars. After they had finished eating, some of the Hawaiians began singing, at first softly and then loudly and more rhythmically. 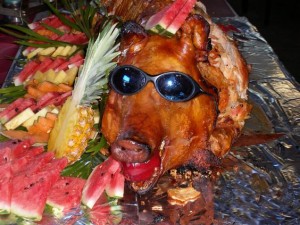 Katey felt the lift in her blood again, moved by the night, the singing, the dimness of faces in the flame-edged dark. She was a little drunk too; pleasantly so. Joe was sitting beside her, humming the tune the boys were singing, and she was suddenly, sharply, aware of him – of his voice, a sudden movement of his leg. She turned to him, touching his arm. She saw him look her way.