Enemy of the people!

He had expected the atmosphere of the court-room to be one of feverish and rabid emotionalism, but so far it was not like that. The Robey who had asked him how he pleaded spoke in a calm, reasonable-seeming voice. He said:

‘I wasn’t helping anyone to escape from anything. He was ill and needed attention.’

‘Are you a doctor, Brother?’

‘No, but it was obvious that he was ill.’

‘Why did you not seek proper care for him, in that case?’

‘Because I thought the most important thing was to get him out of the way, before he was lynched.’

The Robey smiled down at him. ‘Then you knew, Brother, that the people were seeking him?’

His voice trailed away, as he saw that he was being ignored. The Robeys conferred tog 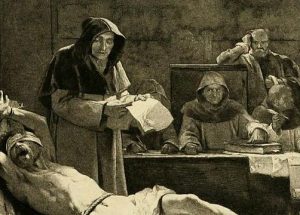 ether in quiet voices. Then the spokesman said:

‘You are found guilty. The sentence is one year in a work battalion, where you can make amends, by helping in the reconstruction of this great country, for your defiance of the people’s will. Submit your body to the people, and your soul to God.’

‘I have a family to look after.’

‘The Lord will provide.’