It had erupted with such suddenness, a boiling up of vengefulness and insanity. Presumably the yobs had stayed out of the city during the earlier part of the day, and then had come in, either as a demonstration of strength or because they had been lulled into thinking that it was safe now – that whatever had gone wrong was confined to London and did not affect them here. But the calm had been deceptive, and a few Robeys, sacrificing themselves, had whipped the rest of the populace to a fever of blood-lust. It could last for days, whether or not the yobs were able to put in a counter-attack. Rod was glad they had food to last forty-eight hours at least. The sensible thing 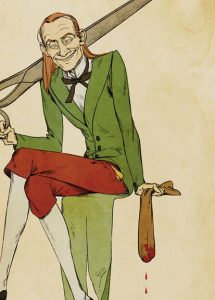 , the only thing, to do was get into the flat and hole up there.

The peaceful street was peaceful no longer. A procession, led by three or four Robeys, was marching up the centre, singing a hymn. Others were standing, watching and cheering. At one point, a small group clustered round a man in a dark, typically Civil Service suit. He was holding up his long black rolled umbrella, and the staring head of a boy of about twenty surmounted it, blood dripping from the hacked-off neck on to the black oiled silk.

There was no hope that the children had failed to see that.