Guernsey – a land of deep conflicts

May 9th 1945 saw the end of  five years of occupation of the island of Guernsey, when British forces arrived in St Peter Port, greeted by crowds of joyous but malnourished islanders.

Here Hilary Ford reflects on the occupation, and its effect on the Channel Islands:

Guernsey is a land of deep conflicts, fairly well concealed. There is a centuries-old hatred of the French, and a slightly better hidden resentment of the English, seen until relatively recently as occupiers. The Jerseyman – toad to the Guernsey donkey – was another enemy; and finally they mistrusted one another. In the 1940 evacuation under threat of German occupation, the islands split in curiously different ways. In Jersey, 30% left and 70% stayed. In Alderney everyone chose to go, leaving the island empty for the use of the Todt slave organization, and also leaving behind the last of the unique breed of Alderney cow – subsequently rescued by canny Guernsey farmers to be subsumed within their own Guernsey cattle. In Sark, the Dame gathered together her tenants and ordered all to stay. 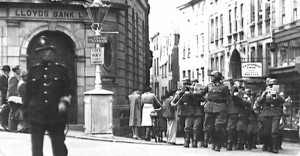 But in Guernsey the split was fifty-fifty, and those who left and returned after the war claimed to have found items of their furniture and goods in the houses of those who had remained. Twenty-five years on, commemoration of the traumatic summer of 1940 in the local press provoked bitter letters.