‘The toast may be a little variegated. We’ve had to improvise a toasting fork.’

‘Toast made on an open fire!’ Grainger said. ‘Can I come and make my own?’

Mandy shook her head. ‘You’d get in Marie’s way, and we can’t afford confusion this morning.’

‘And the light from a paraffin lamp,’ Grainger went on. ‘I haven’t seen one since I was a boy. They used to have them in the gardener’s cottage. I used to make toast there in front of the fire. They had a fork Kendall had made himself from thick copper wire. I used to sit on the hearth-rug. It was one of those made of bits of rag – all different colours, in patterns.’ 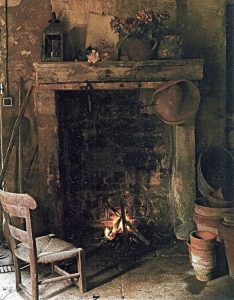 George started to butter his toast. ‘I know just what he means,’ he said, ‘rag hearth-rug and all. But it wasn’t the gardener’s cottage. I lived in it, with my old gran. And those lamps, quite frankly, were a bloody nuisance – trimming the wicks was one of my jobs.’

He was smiling and, she saw, watching the Graingers. It was one of his tricks. He enjoyed seeing if he could produce a reaction: embarrassment he found particularly amusing. She felt herself, as always, warming to it. It was on just such an occasion that he had first stood out to her as a person.