That’s something we’ll have to put a stop to

On the way down I thought about Olivia. She descended the stairs in front of me quite jauntily. I wondered if she was finding her way into some kind of freedom, with or without the guiding hand of Britton. Even at the séances now she had his defence, such as it might be. Piers had not pricked her lately with his venom, but it was difficult to believe that that had anything to do with Britton’s presence. Briefly I caught myself wondering that Piers should apparently be complacent about losing his grip on her; and then wondered that a thought so implicitly melodramatic should ever have entered my head.

Britton was in Helen’s room and Olivia joined him while I carried on down to the basement. Helen was laying the table. She smiled at me and nodded vaguely towards the kitchen. 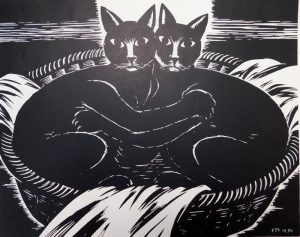 Badger and cat were lying on the small rug in front of the stove. Brock’s delicate tongue was caressing The Cat, licking gently along her fur. I was watching them when Piers appeared in the other doorway. He must have been able to hear the noise of Helen’s activity in the communicating room, but just as clearly he did not see me where I stood partly hidden by the great linen cupboard. He spoke softly to the two animals.

‘So that’s where you are. That’s something we’ll have to put a stop to, isn’t it?’