The telegraphese from the paranormal spelled out:

Olivia laughed. I imagined it was intended to be scornful, but there was a nervous sound to it that destroyed the effect. I broke in:

‘Anything for me, Ming? Which Labour Exchange do you recommend?’ 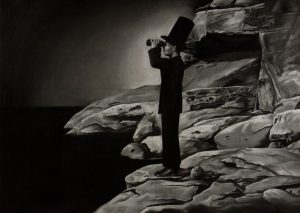 The table reared, and we spent about half a minute restraining its levitational urges. When it finally subsided it did so completely, relaxing into a wooden and unresponsive inertia. There was a slackness pervading the atmosphere. We sat for some time hardly talking, finding it an effort to speak, aware of the physical strain of drawing breath. The sequence of jazz records lapsed into silence, and with the removal of this last external measuring-rod time became entirely subjective and unreal, apprehended only in the moment’s pulse of blood. We lay in that special kind of lethargy which occasionally comes with drink; the universe is moving about you, slowly, almost imperceptibly in its nearer objects, but with increasing speed out to the dizzily whirling stars on the outer rim – you are the hub and for you there is no such thing as motion. There is no action you can take or want to take; not even the moral action of judgment. If rapine and torture and murder were enacted before your very eyes it would all be part of the moving, meaningless, external world.