The devils claim another victim …

This aimless slamming away at disconnected points was not, Selby felt, advancing their understanding of the situation; the reverse, if anything. There had to be a logical explanation, but it would need working out, step by step.

He said: ‘Let’s tackle this bit by bit. We can make assumptions as we go along, and test them by the evidence. Two, to start with – that Ruth got in by pushing Andy through the little window and having him open up to her, and that Leonard is now in the same condition that she is in – whatever that may be.’

George objected: ‘We don’t know much about Leonard’s state of mind. None of us has seen him – Douglas was half asleep when all this happened.’

‘True,’ Selby said. ‘And yet Leonard, along with Ruth and the boy, ran like hell when the alarm was raised. Just as Ruth ran this afternoon.’ 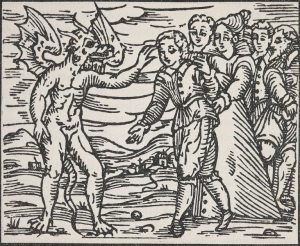 ‘Or Marie’s devils, or the disease unknown to science. Let’s take things back a little. Marie finds Ruth and Andy apparently attacking Steve yesterday afternoon. They grapple with her, but Mandy comes on the scene. So they flee. They manage to hide somewhere outside – perhaps by digging holes in the snow, as the boy did before – and in the night they came back to the house. They get in, quietly. They go quietly upstairs to Leonard’s bedroom. And then …’

Jane said: ‘Then it becomes ridiculous. I mean, all the rest can be explained as some kind of brainstorm in Ruth – the boy would follow her automatically.’

‘Would he?’ Selby asked. ‘I don’t think so. But let that go. Leonard is by himself, because Steve has been left with George and Mandy. Perhaps he wakes up, realising they are in the room with him. Even if he does, why should he raise an alarm, against his wife and son? Or perhaps he is sleeping more soundly than Douglas. Anyway, something happens in that room. The devils claim another victim. Or the sickness infects him. Or the hysteria communicates. However you describe it, there are three of them now, instead of two.’

Selby said restlessly: ‘Whatever it is, it can be passed on. And there is an urge to pass it on. The attack on Steve, the – the recruiting of Leonard, the threat to Douglas. Why Douglas? Probably because apart from Peter and Marie in the attics – and Peter is a light sleeper and the attic stairs creak like hell – Douglas was the only person in a room by himself. And therefore vulnerable.’