The lonely are the hard ones

I was always anxious to co-operate with Anna in avoiding subjects about which she was sensitive; sensitivity made her ferocious. But I raised the matter with Dadda in the office one day. I had come in early from my round because I had arranged to go along to the local tennis club that evening. Dadda was having his afternoon cup of tea, prepared by the long-practised hand of the girl – a woman now, getting into her late twenties as serenely as if they were already the lonely old age that lay ahead of her – who had been his first employee. I stayed to have one with him. I mentioned Anna’s new preoccupation:

‘It’s the sort of thing that’s all right for silly old women – and Henry, of course – but I’m surprised at Anna going in for it.’

Dadda sucked at his tea thirstily. ‘There could be many worse things than that, I think.’

‘You’re not going to defend it – all that mumbo-jumbo?’ 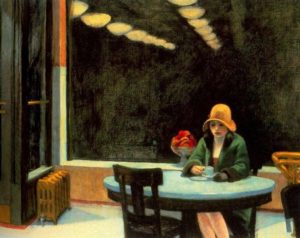 ‘Only for Anna. She is clever and lonely, and the world can be hard. For the young especially.’

I glanced at him. He sat hunched up in his chair; he had a look of concentration, almost of pain.