As he reached the first rock-encircled pool he wondered if he would find the little girl there, until he remembered that she had gone home the previous morning. They had hunted crabs together every day without bothering to ask each other’s names or anything beyond the immediately practical questions of the hunt. Standing now by the pool which had always been the starting point of their forays, Lan 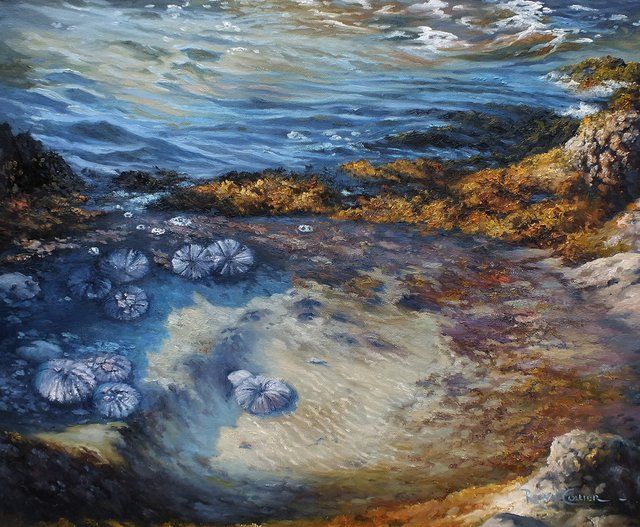 He sat down on a round, damp rock, suddenly feeling very sad. He would not hear the small, clear voice again, and after to-day he himself would be gone, and the silent, reproachful pools, rich with crabs and seaweed, would lie unwatched. He felt the damp seeping through from the rock to his skin. Purposefully he stood up and waded out into the middle of the pool. Through his feet he felt the thin slime coating the rocks, and his toes brushed through thick clusters of weed. Before he had always walked warily and slowly, frightened of his quarry as it lurked behind rock and under weed with claws ready to tear. But now, knowing it to be the last time, he hunted boldly; reaching down fearlessly with his hands to pry away loose stones, and even kicking through the weed with his feet to disturb the hoped-for prey. He searched the pool carefully for some time, but found nothing.

From this point the pools and hollows, with their accompanying rocky eminences, stretched almost continuously away to the curve of the headland. Lance paddled and clambered through and over them, never relaxing the intensity of his search.