The ordinary is only just around the corner

The silence between them, with this consideration, became awkward. He tried to think of something to say that would be suitable, but the words and phrases spun emptily in his mind, at once banal and outrageous. He told himself he would stay mute and then, compulsively, found himself talking:

‘We should all have training, I think, in the appreciation of impermanence. And some kind of punishment whenever we try to make the transient things into enduring ones.’

‘Should we?’ she said. ‘What are the transient things, for that matter?’

‘Everything passes. And a good thing. If happiness lasted, grief would last as well. As it is, there’s always a monochrome to look forward to. The ordinary is only just around the corner.’ 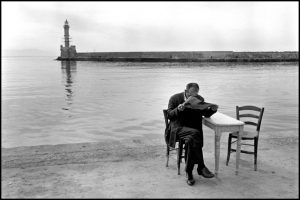 And there, of course, he was talking about himself, as he had suspected her of doing. He saw her look at him; his voice, probably, had given him away …

She said quietly: ‘And if a person chooses the monochrome, deliberately, turning away from brightness – and then loses that, too. What then?’

‘The monochromes are self-perpetuating. They renew themselves very quickly. That’s their big advantage.’

There was another short silence, before she said:

‘I think I’ll go and take a bath. Will you excuse me?’