They died with the rest

I dreamt the other night that I had done it and that it was published in the B.M.J. Funny thing, I can remember the papers immediately before and after it, too. One on a new technique for nephrectomy and the other on strangulated piles. I’d called mine “The Ant-hill Syndrome”. Rather a neat title, I thought.’ 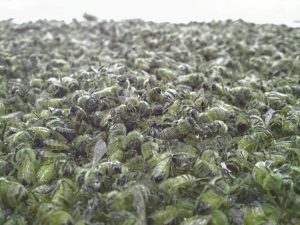 ‘Because I read somewhere once about the way ants behave when the ant-hill’s taken a beating. Up to a certain level of damage, the pattern’s not unlike the one reported in The Lancet: initial disturbance and confusion but fairly rapid recovery as the survivors – or the more enterprising ones amongst them – get over the shock and set about putting things to rights. But it’s quite different when the damage exceeds the level. Then, as far as the survivors are concerned, there’s no recovery. Their behaviour becomes more and more pointless and erratic and destructive.’

‘Because the queen’s dead, I imagine.’

‘I have an idea that wasn’t the operative condition, though I can’t be sure. But isn’t our queen dead, too? I don’t mean the person – the guiding force in our society, the source of purpose and identity. It’s an interesting speculation. The point is that we’re behaving like the second category of ants. There’s a mass psychosis, which it would be absurd to try to influence. I suppose there may have been a few relatively sane ants, too. It made no difference. They died with the rest.’