It was a relief to be in a place where the windows let in all the light, even this meagre mist-filtered light. Douglas glanced at his watch. Half past eleven. The work had taken longer than he had thought. While George fiddled about behind the bar, he went through to the salon. He had only seen Jane for a few minutes that morning, and was, he realised, looking forward to seeing her again. She was sitting in the armchair by the fire with a book – the same leather-bound book she had had the previous evening. It was this, unexpectedly, which gave him pause, reminding 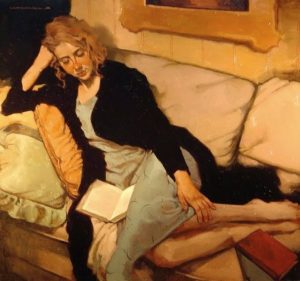 him of the confidences they had exchanged then, and that they had not been alone together since.

The pause was only momentary. He went across the room, aware of being glad that he had found her by herself. They were all thrown together, made closer and more human to each other, by the danger outside, but the alliance of shared privacies was a different and more compelling one. For himself, the weakness of wanting where he was not wanted. For her, the ennui of ceasing to want altogether. And, for both of them, loneliness. She looked up, as he approached, and he said, smiling:

‘We’ve barred every part of the house except this. It should be secure enough now.’