Every dance after this with you

Robert said: ‘And I shall have every dance after this with you too.’

She looked at him curiously. The slack mouth was tightened into a quite unreal thinness, flesh wrinkled above the deep, close eyes.

She murmured: ‘You are so determined …’

The hand on her back gripped more rigidly. Robert smiled. 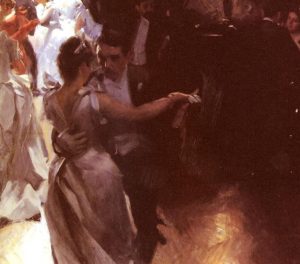 ‘… that I feel bound to wonder why you consider it so important to be determined.’

He looked at her, puzzled, the mouth falling open. She felt the hand behind her slacken and his forceful leading faltered. She pressed her point relentlessly, half-ashamed of her own cruelty, half-contemptuous of the grotesque weakness under the surface vigour.

‘You keep recounting the things you are going to do … with admirable severity. But you know none of them will be done. Don’t you?’

He gave a little, embarrassed laugh.

‘How could I press a lady against her will?’ he said. ‘I don’t like asking for things … Do you resent my demanding?’

She felt the bright strength of her own cruelty; her small voice so quickly lost in the sweep of the waltz, the chatter, and the colours that seemed to sing like angels, and yet so deep-barbed to the man before her. The rest of the dance they were silent. She glanced at the crumpled face and looked away again. She could so easily have bolstered its attempted strength, merely by accepting, by not challenging it. But why blame herself? It fed like a fire on the dry sticks of acquiescence, until at last it had to be extinguished; the sooner it happened the better for Robert. Later it would put out tentative tongues of flame again, tongues that would leap where none resisted them until the fire burned again beneath the slack ruin, and swept higher and higher to another fall. Must he always fall and rise and fall again, always arrogant and humiliated? The music swung to its close. It didn’t really matter.