The utter improbability of such a thing happening

‘So she told you it was just a boy-friend, and we had something against him? She’s a liar as well as a slut. Look at that.’

Mamma tossed her the poem. I was standing near her, and when she turned it over to look at the handwriting, I saw it myself for the first time. We both recognized it; the elegant forward slant and the thin, high loops. Peggy herself did all the writing in the household that we would normally see, but I had once seen by chance the manuscript ledgers in which Henry wrote his theosophical musings. There was no doubt that it was the same writing. 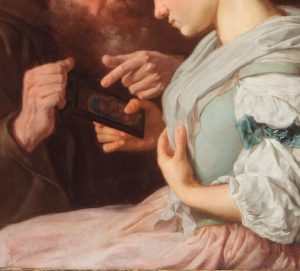 Her voice was strained and harsh, and the local twang was now unmistakable. Her eyes and Anna’s met; reproach and bewilderment against guilt and a touch of triumph.

‘I suppose she didn’t tell you?’ Mamma asked.

It was difficult to believe that Anna had been capable of such extensive and ironical deception, but even more difficult to understand that the affaire, carried on with the unwitting connivance of the man’s wife, had been with Henry, her uncle by marriage. I would not believe it, but there was no alternative to believing it. It was, I saw, the utter improbability of such a thing happening that had made Peggy find nothing strange in the fact that Henry was always away at those times when Anna required her alibis. The idea of a liaison between those two could never possibly have occurred to her.

Peggy’s collapse was complete; she sat, with her hands limp on her lap, her face expressionless. She looked very old.