If only death could

While the sun shone briefly in the late afternoon, Billy managed to get a fire going. They found plenty of wood and built up quite a blaze. It would attract attention, Matthew said, if there were anyone alive on the island, but he was sure there could not be. Nevertheless, it was comforting to see the fire burning fiercely, smoke streaming away in the still stro 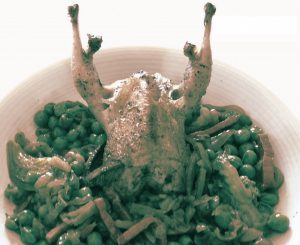 ng wind. He punched holes in the top of the tin of turkey and set it upright in a low part of the fire. Juice bubbled out of the holes, hissed over the depressed top of the tin, ran steaming down the sides. The smell mingled with the smell of wood smoke. Idly, in the temporary comfort and pleasure of it, Matthew opened a small tin which had lost its label. It was in a class with the others: smoked quails in some kind of oil. The two small carcases were pale and naked-looking. He had a sudden wave of nausea as he stared at them. Billy was busy with something on the other side of the fire. He threw the tin away from him, as far as he could down the slope. With hopeless misery, he thought: if only death could put on its disguise again.