Knock once for yes

Howard said softly: ‘Nothing much to-night.’

As though in answer the table jerked quickly, pushing against us, coming down again on the floorboards with a clatter of wooden feet. Jupiter had given way to Saturn. Over the silvery notes, Piers’s voice was clear and gentle. 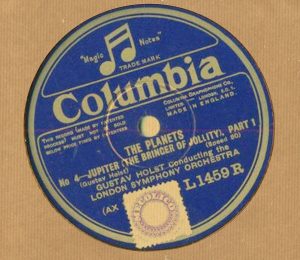 Now a more subdued, a rocking motion. The table swayed backwards and forwards under our hands, faster and faster, and for a moment I felt the fantasy that it was absolutely still and that it was we, and all the black room about us, that were whirling into this furious, unconscious dance. Piers’s voice repeated, steadying:

‘Is anybody there? Knock once for yes.’

Gradually the rocking died away. As it did so a record finished, and there was silence as the auto-change made its substitution. Across the first notes of the new record the table lifted, lifted and crashed down again. Howard, his voice lacking the sure control of Piers’s and a little harsh with excitement, took over the questioning.

‘Who is it? Will you spell out your name?’

He began to recite the alphabet slowly as the rocking began again, and in the darkness I thought of Burkie, and myself stumbling over J and K in the dusty, inky sunshine of the nursery. And the voices through the open window of the men pruning the wall-trees, calling to each other and laughing; slow, contented, sunlit laughter. For a fraction of a second even the distinctive powdery smell of Burkie’s well-scrubbed hands was as vivid and unmistakable in my mind as it had been then. But the instant went and smell, scene and sunlight were lost in Howard’s rhythmic recitation.