No one could make him move now

‘Perhaps I could point something out to you, Mr. Prentice.’ He had a dry tired voice. ‘The firm is only interested in the land if it meets certain requirements. If it should happen that it doesn’t, then they will withdraw from the business. They will be basing their decision on my survey. If you let me go over the land now, I could see whether there is, in fact, anything that would influence them towards withdrawing. We should have done our job, and your mind would be set at rest.’

Old Harry laughed; there was anger in it. ‘Right, Mister! So the man at the door says: “If you just let me run up to the bedroom and look the old woman over, I’ll be able to tell if there’s aught as my master wouldn’t take a fancy to – maybe she’s got a mole on her backside. Then I can tell you he won’t be interested in buying her, any road.” I’d be glad if you would go, gentlemen, while I’m still being polite. I don’t like losing my temper; it upsets my stomach.’

Carter said: ‘The alternative, from our point of view, would be to get a written order for viewing from Lord Widmer’s agent. Is that the course you want us to adopt?’

‘Get out!’ Old Harry said. ‘That’s the course I advise you to adopt, and you can adopt it quick. And there’ll be a gun ready for the next man that comes here to talk about surveying my land. You can inform your directors of that.’ 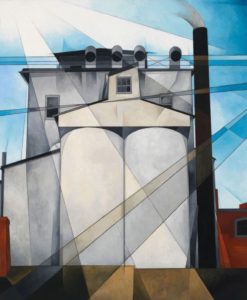 They left, but Carter paused at the door. ‘I’m sorry about this, Mr. Prentice, and I think I understand your feelings. I’m sorry. Sorry now, and sorry in advance.’

‘Not as sorry as you will be,’ Old Harry said. ‘Go and tell your sultan what I told you.’

Old Harry stared for a moment at the doorway through which they had gone. They heard the engine of the car start, and then the sound of its departure. Old Harry said: ‘Blast ’em!’ and then, paying no attention to the children, went out the same way himself.

Patrick, bending down beside the tractor, said: ‘He told them off, all right, didn’t he? I thought that was good about the sultan.’

John said: ‘I suppose they are going to put up a factory here. That’s the only reason they can want the land.’

‘But they can’t if Mr. Prentice doesn’t let them,’ Diana said.

John tapped the side of the tractor with his knuckles. ‘They’ve got more money than he has.’

Diana said: ‘But Mr. Prentice has always been here. Hasn’t he, Frank? No one could make him move now. He said he was going to buy the land himself.’

He was thinking, with admiration, of the man Carter. Calm, regretful, but wielding power.