Offerings to a god

Lydia awoke early in the morning and set off up the valley before any except Candie, who had taken the last sentry duty, was awake. It had become a habit for someone to go up each day and take food from the communal store to Sweeney; he had not asked for it but it was done anyway. Lydia was exempted from tasks imposed on the others, but she included herself in this. She took breadfruit, cold pork, pineapples, bananas and wine with her and made her way along the path. The air was fresh, birds clamorous, the cloud on Mount Proteus lit gold with the bright horizontal strokes of the barely risen sun. 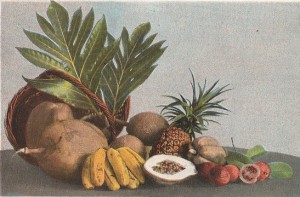 She had thought, starting so early, that she might have found Sweeney still asleep, but in fact he was bathing in the stream beside his cave, stripped to the waist, splashing the cold clear water over his mountainous flesh. Not much like a god, she thought, and wondered why she thought it. He rose from the stream as she approached and rubbed himself with his shirt, which he then tossed into the stream and weighted with a loose rock. He would dry it in the sun later. Laundry was not one of the major problems of life on the island.