‘Our last day down here.’

‘It must be. We have good light for four or five hours, and then two candles, some matches, and a lighter. But even if it were not for that, it is also true that we are all the time growing weaker. We will have less strength today than yesterday – tomorrow, none, I think.’

After a brief silence, she said: ‘You wanted death, didn’t you, Albrecht? It was – those other two who had everything to live for.’ 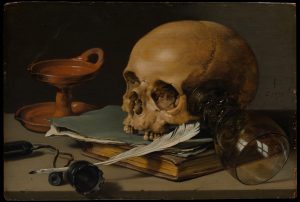 ‘It is strange. I wanted death; or rather, I had ceased to want to live. I thought there was nothing which could bring that desire back to me. Yet now, when death is so close, I want to live.’

‘Perhaps it’s just that even death you must have on your own terms – you can’t bear to have it imposed on you.’

‘No. There is more. I want to live.’ His hand found her sleeve and travelled down to her wrist. ‘I love you, Cynthia. I want you to marry me.’

Although he had spoken softly, she said: ‘Hush!’

He said, still quietly: ‘Why? We do not need to hide things any more. If we die, we die together, and if we live, we can live together also.’