Lulu said: ‘I think I’ll go up to my room. See you all at breakfast.’

Leslie drew a deep inhalation of his cigarette before following her. I turned to go myself. At the door I paused very briefly to look back at Piers and Olivia, left alone in the room together. They sat drooped in their chairs with averted eyes, like marionettes thrown down by the puppet-master; thrown down by chance in opposing aspects where they would never be able to see each other again.

‘See you below,’ I said, and closed the door behind me. 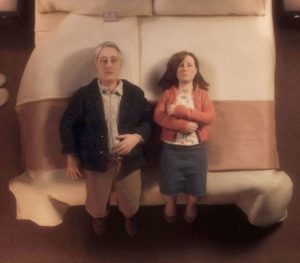 I heard a voice from the third-floor balcony and looked up. I could make out Leslie’s face in the shadows, leaning over the banisters.

He said: ‘Ask Helen if she’ll make up a tray – coffee and biscuits for two. I’ll be down for it about’ – he lifted his wrist and I saw the luminous flash of a watch dial – ‘… about quarter-past ten.’ He laughed softly. ‘You understand. Twenty minutes. The first intermission.’

I saw him disappear, heard him open a door, and went down to my own rooms. Rupert was still lying on my floor, not attempting to read any longer but simply contemplating the ceiling, his hands clasped behind his head. He did not stir when I switched the light on. I walked across and lifted him gently with the toe of my shoe. He spoke then.

‘Tennyson,’ he said, ‘night is a fascinating thing. It dispels all the confusions of day.’

I put my hands under his shoulders and he allowed himself to be lifted.

‘You aren’t the only one who thinks so,’ I said.