The lady of the house

The street was not unlike those in the Gostyn Estate, but older; built not long after the war and, he noticed, shoddily. There were cracks in several houses, including the one at whose door he now stood. The woman who answered his ring was about fifty, bulky, with a large bosom and long 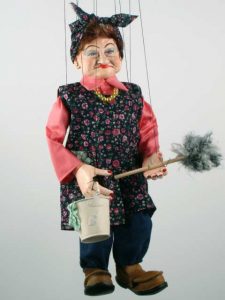 neck. She wore a flowered pinafore over an old jersey and skirt. She looked tired and a bit bewildered, but it was a common expression these days.

‘My name’s Gawfrey. Buying and selling. This is a buying trip, but if there’s anything you want I’ll make a note and do what I can for you.’

‘Buying, is it?’ There was Irish in her voice. ‘I find it hard enough to buy the rations, and a bit of coal for the grate.’

‘As I said, this is a buying trip. I’m doing the buying. There might be something you want to part with.’

She hesitated. ‘Come in, then, out of the draught.’ As he followed her into the house, she added: ‘My husband’s out, looking for work.’

That was a good thing. There was more likely to be trouble when the man of the house was about.