You pair of drunken loafers! 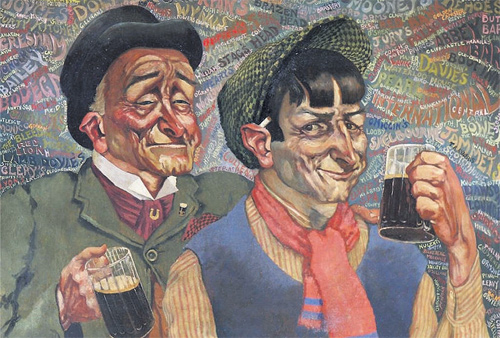 Sean O’Connell and Victor Wilkins took to the free drink as Mamma had said they would and began to shout remarks which were indelicate, with the promise of leading to even worse. Jinny rose in her wrath against them:

Victor subsided, muttering threats about the Irish, but Sean rose to his feet.

‘Keep your filthy tongue off my husband,’ Jinny shouted. She paused dangerously. ‘If it’s being a man you’re talking about, would you like me to tell the company one or two things your wife has told me in confidence? Come on now. Don’t sit down so quick. Well, then?’

Isaak throughout sat beside her, smiling his approval. He had drunk as steadily as anyone, but drink with him, up to a point, only increased his natural assurance and confidence. And he knew where the point was, and did not go beyond it.