Hungry for the bounding waves

Frank led the way on to the pier, down the ramp – slanting sharply since the tide was out – and through to the landing stage. The ferry boats huddled against the wharf, and beyond them the Mersey stretched grey and unfriendly, its heavy waters whipped into froth by an east wind.

Mary said: ‘Golly! I wouldn’t like to be out on that, would you?’

The signboard directly facing them advertised the New Brighton ferry; it was due to leave in less than five minutes. Frank glanced at Hilda; she caught his eye and he winked at her solemnly. He said to Patrick:

‘How about it, Paddy? Just the thing to blow away the cobwebs. Feel like a trip to the golden sands?’

He used the jocular tone in which they were in the habit of discussing unlikely events. Patrick responded to it in the same way.

‘I feel more like a trip to some golden toast, with or without sardines. What about you, Hil?’

Hilda looked at Frank. Frank said: ‘Have you got your mind fixed on toast as well, Mary?’

She nodded. ‘I’m ravenous. It must be the sea air.’ 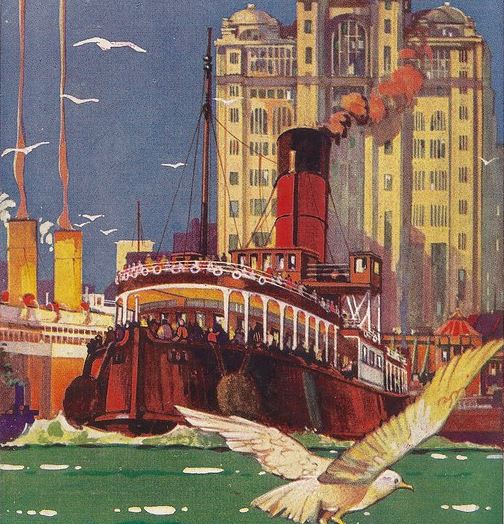 Frank’s look this time rested more pointedly on Hilda. He said: ‘Am I the only one anxious for the open main? It’s going to be a lonely voyage.’

‘That solves things then. Mary’s ravenous and so is Paddy. Hilda and I aren’t hungry for anything but the bounding waves.’ He took a hand each of Mary and Patrick and pressed them together. ‘Bless you, my children. We’ll see you again some day, and may all your troubles be little ones. Come on, Hilda. We’ve only just got time to climb aboard.’

From the rail they looked down on the two faces on the landing stage. Mary was looking confused; Patrick grinned up with more cheerful bewilderment. Beside Frank, Hilda clutched his arm tightly. Her excitement was clear, and could be taken advantage of. He made up his mind that he would seduce her that afternoon.

He called down to the other two. ‘Don’t forget to enjoy yourselves!’