It would be a good thing to have a rest

She held, in any case, a view that was the opposite of that apparently held by most Christians – she regarded religion as an activity more suitable for the men than the womenfolk of a family. Had she married Uncle Isaak, I believe she would have turned Jewish. As it was, she was mildly shocked, I think, when Dadda stopped going to synagogue, and there was as much of this as of concern for his health in her attempt to persuade him to return to the practice of his faith.

He smiled. It was a Friday evening, in the winter. He had got back about nine, and had his supper, and was sitting in his rocking-chair smoking the navy twist for which he had developed a liking during his imprisonment. He had his feet up on my little stool; the gas was flaring and the fire smouldering in a red hill in the grate; and outside it was dark and cold. 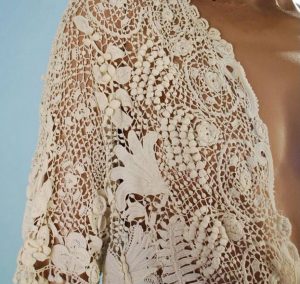 ‘You could spare the Saturday. And it would be a good thing to have a rest. You do too much.’

He shrugged his thin shoulders. ‘I do not have much to carry with me. It is not much strain.’

She looked up from her crochet work. She crocheted whenever there was a moment in which she could sit down and have her hands free. The house was full of her work and I have a lot of it still – intricate and delicate and so much more enduring than flesh.